As I mentioned in the previous instalment of this series, the biggest take away from Safari #1 for me was that road trips weren’t the best way to experience a wildlife photographic safari. Neither was going to national parks where we couldn’t get close to animals, or even if you could, you had to jostle with loads of other cars full of people also wanting to see the same animals. What I had to do was come up with a solution that addressed both of those issues.

I don’t recall exactly where it popped onto my radar, but somewhere I heard about Sabi Sabi, this private game reserve in the Sabi Sands (which is adjacent to the Kruger Park) where the rangers drove you around in open Land Rovers and also made use of radio communications between themselves as well as their Shangaan trackers to find animals like lions and leopards. They would also be able to drive you right up to these predators, going off road if necessary. It sounded to me like a fabulous solution for photographers wanting to get great shots of Africa’s Big 5 – in other words, most of the NG audience. The only problem was, it would cost a LOT to go there. If we were working on the same 2 week safari time frame as before it would literally double the cost of what we had charged for Safari #1. Hmmm…

I did some investigating and made contact with the management at Sabi Sabi to see if I could get some kind of a deal going with them if we booked out an entire lodge. I managed to negotiate that both myself and Pepe could stay at the lodge for free in their Pilot rooms (basic guide accommodation), but also join in the game drives and share all the provided meals with our guests. Instead of spending two weeks on safari, I dropped the time frame down to 1 week and Pepe added in optional safari extensions that she would take the guests on either before or after the main trip. After some number crunching we came up with an attractive safari and put it out to the NG community.

I was actually quite surprised at just how well received Safari #2 was, especially among members of NG who I had never even heard from before. I got a lot of emails and before we knew it, the trip was fully booked for October 2010.

The plan was that we would rendezvous in Johannesburg and stay at a lodge near the airport. From there I would fly with our Safarians to Nelspruit airport, which is about 90 minutes drive away from the Sabi Sands Shaw’s Gate. Pepe would drive most of the guests luggage and gear from Johannesburg and meet up with us at Nelspruit, where we would get a final road transfer to Sabi Sabi.

When our plane touched down at Nelspruit we emerged onto the tarmac to face an ambient temperature of something like 38˚C. It was also extremely dry, like a million hair dryers were blowing in our faces. Oh dear Lord, I thought, I will not survive a week of this. At that time I was fairly overweight at about 110kg, so extreme heat didn’t agree with me much at all.

By the time we arrived at Little Bush Camp in Sabi Sabi, the temperature hadn’t dropped and we discovered to our horror that the camp had almost been consumed by an intense bush fire the night before. It had been touch-and-go for them to evacuate the guests who had been staying before we arrived, but fortunately the entire staff of Sabi Sabi had rescued the situation by battling the flames themselves with blankets and whatever else they could find to arrest the flames. It is a remarkable measure of the calibre of people who run Sabi Sabi that they would put their own lives on the line and work throughout the night to protect their work space.

After camp manager Hugo gave us a brief introduction to how things work at Sabi Sabi, we had some lunch and then we got ready to explore the reserve with our two rangers, Richard & Rika and their respective Shangaan trackers (Jack & Solly). By then the heat had begun to die down a little and the sun was hiding behind some cloud cover making it a little less unpleasant.

Sitting in the front passenger seat next to Ranger Rika as our first drive got underway, I was trying to understand what was going on with the radio comms between her, Richard and the other rangers out on drive. The language they were speaking was a bamboozling mixture of English, Afrikaans, Zulu and Shangaan, but the gist of what I was hearing was that they were looking for something called a “skankaan”. Skunk? Why would they be looking for a skunk? Rika, who I had an immediate rapport with, just smiled and told me to wait and see. Ok. No problem.

About 20 minutes later we came across a very excited Ranger Richard, who joyfully pointed out that he had found the skankaan before Rika did. It was a male cheetah lying in the long grass of an open veld, also trying to beat the heat. Wow! What a find on our first drive! 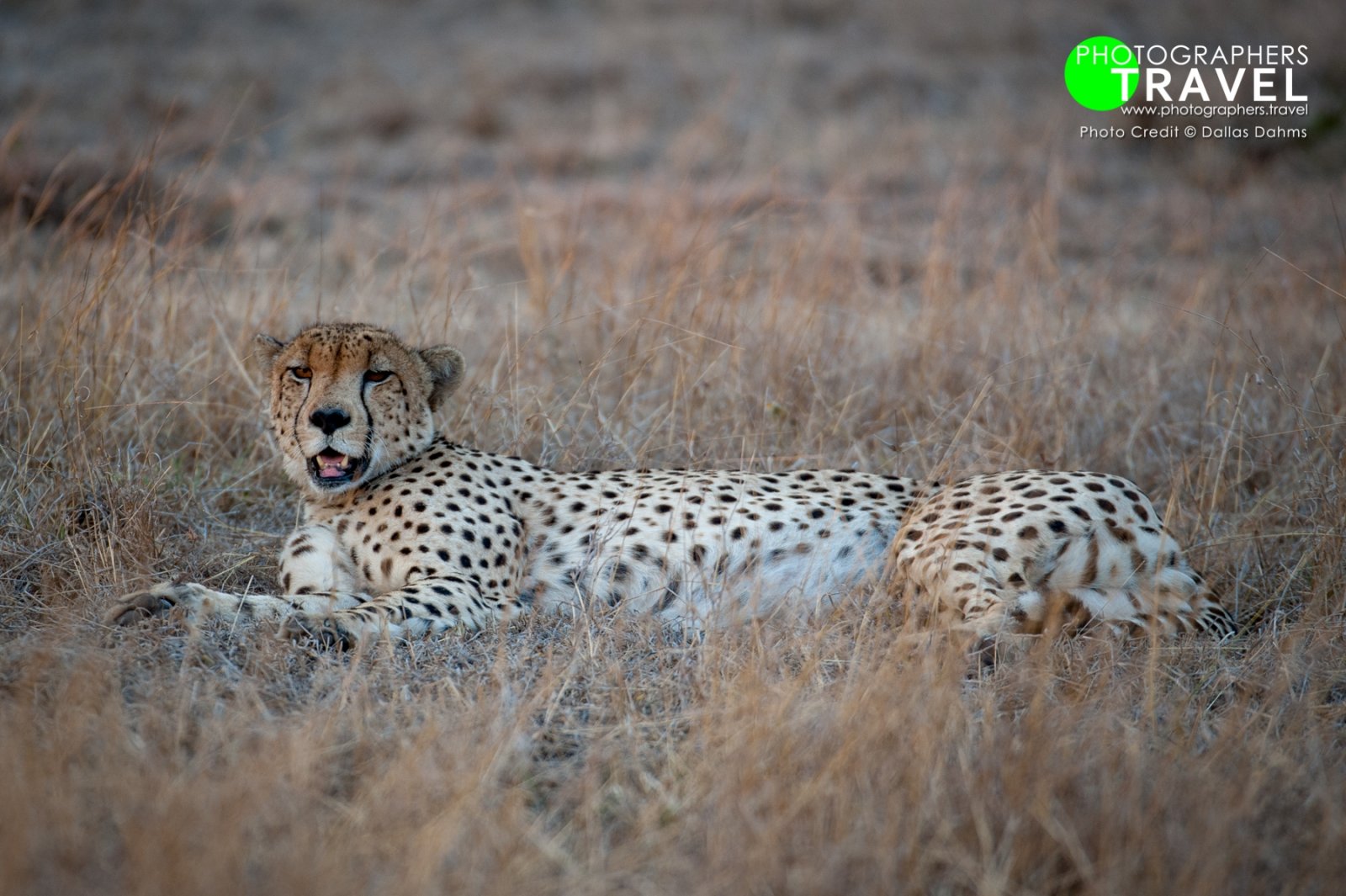 As several thousand frames were going off around it like a mini-blitzkrieg, our cheetah roused itself and in the dimming light began to walk around, taking in its surroundings. Off in the distance was a white rhino and her calf, and just a little further beyond them was a small herd of impala, also known as Bush MacDonalds because of the M-shape of their rear end (and the fact that they are the primary food source for many of the predators).

Rika’s brow furrowed slightly as she started the Land Rover to follow the cheetah. “I think he’s going to hunt down one of those impalas” she said. “Get ready!”

By now it was getting pretty dark and the Nikon D700, while capable of decent low light performance, wasn’t the ideal camera for this task while connected to a huge Sigma 120-300mm f.2.8. I made a decision that I think was probably the right one as we watched the cheetah begin stalking the impala while using the rhinos as cover. I would rather witness the chase with my eyes than try to keep track of a well camouflaged cheetah chasing down an impala at 80km/h. 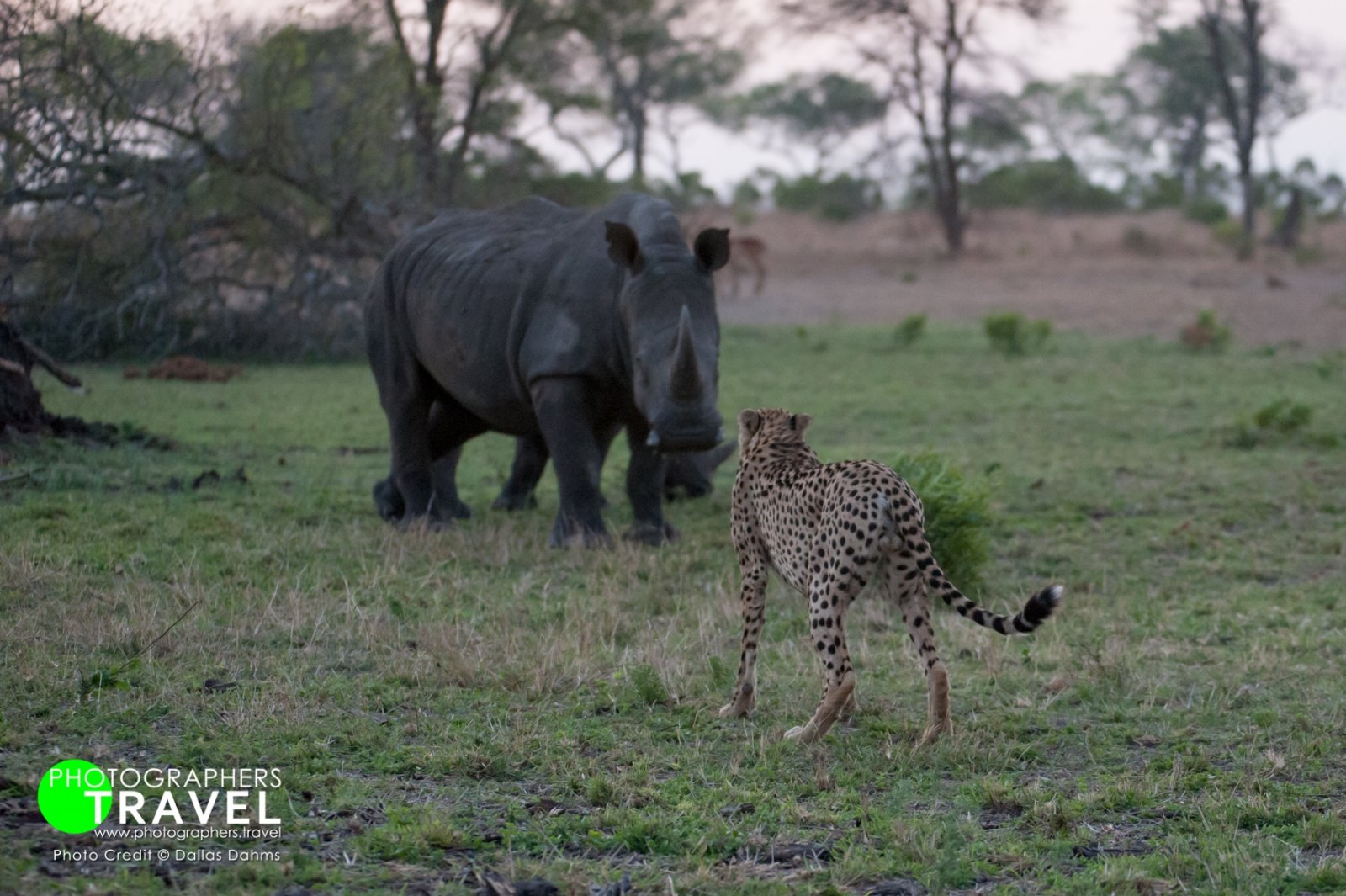 What happened next will always stay with me. The cheetah burst into attack and the impala began scattering away helter-skelter across the veld we were on. It was an incredible thing to witness as that animal hit its straps in hot pursuit of its dinner.

He didn’t get his quarry, but in recovery he ran onto some of the scorched ground that the bush fire had left in its wake, making him pop out of the dark surroundings perfectly for one of my favourite shots from that safari. 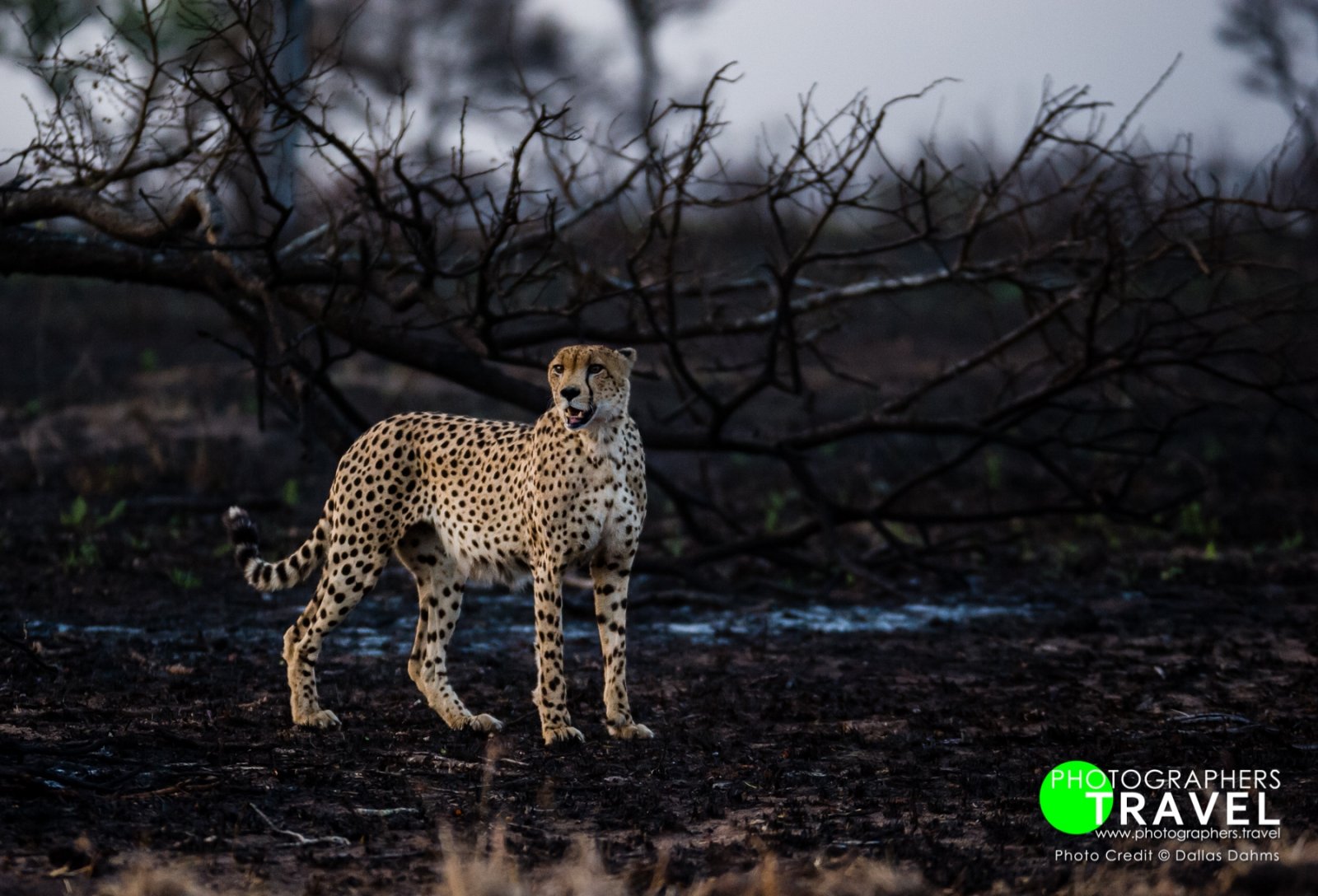 Over dinner that night we could barely contain our excitement, many of us suggesting that we may as well go home because it was never going to get better than that. What an introduction to Sabi Sabi!

The next six days went by in a flash. We saw lots of elephants, way too closely for my liking but much to the amusement of Ranger Rika who at one point thought I might need defibrillation as a matriarch passed by closely in front of us. We also experienced a pair of male lions roaring up close as night fell. A lion’s roar is indescribable. It’s almost as if they are doing something to the atmosphere because you can feel a vibration in your chest as they push their sound through the air. According to a book I have about lions their roars can be heard from as far as 3km away and are used to announce themselves as dominant in the area. 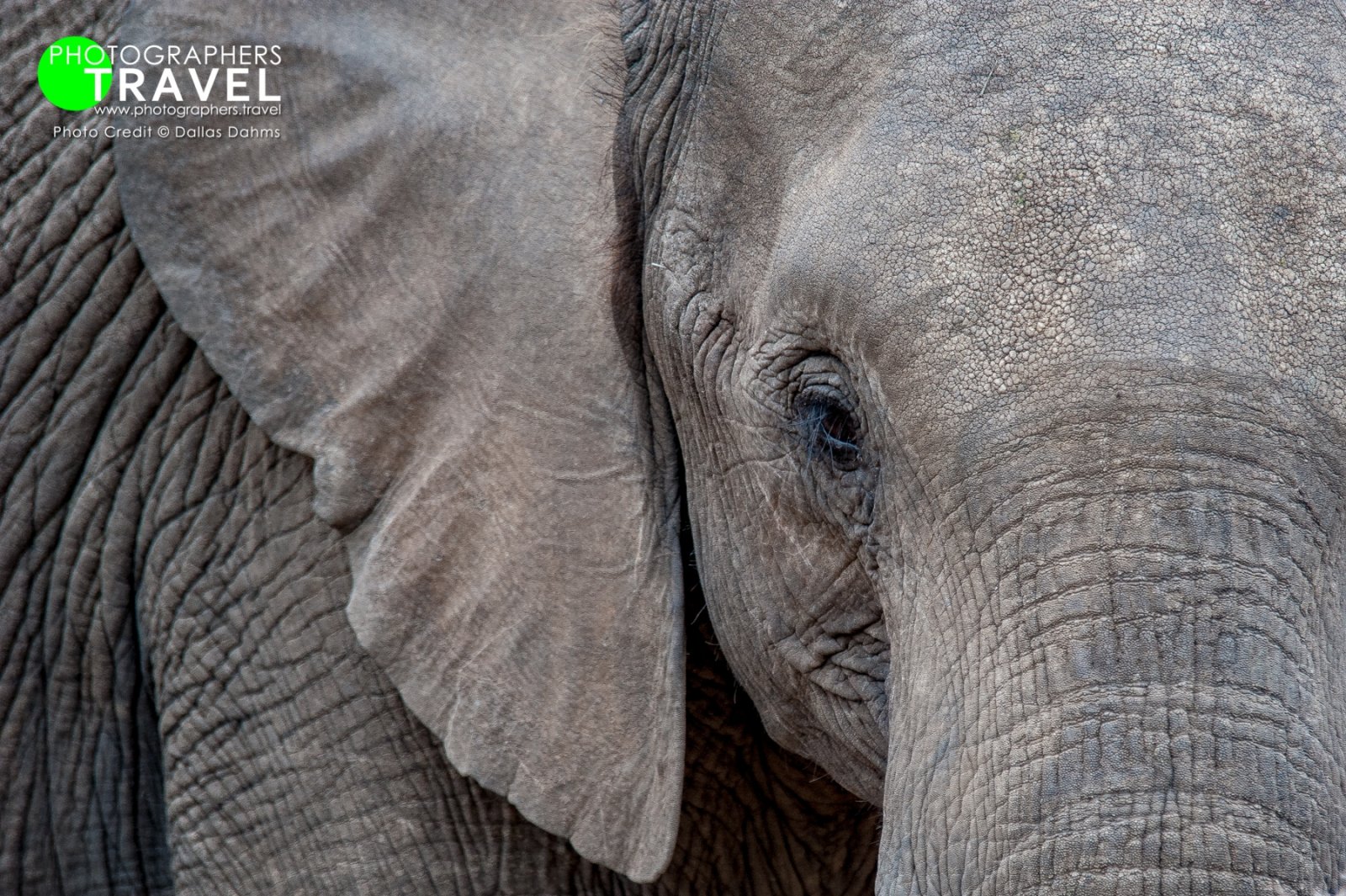 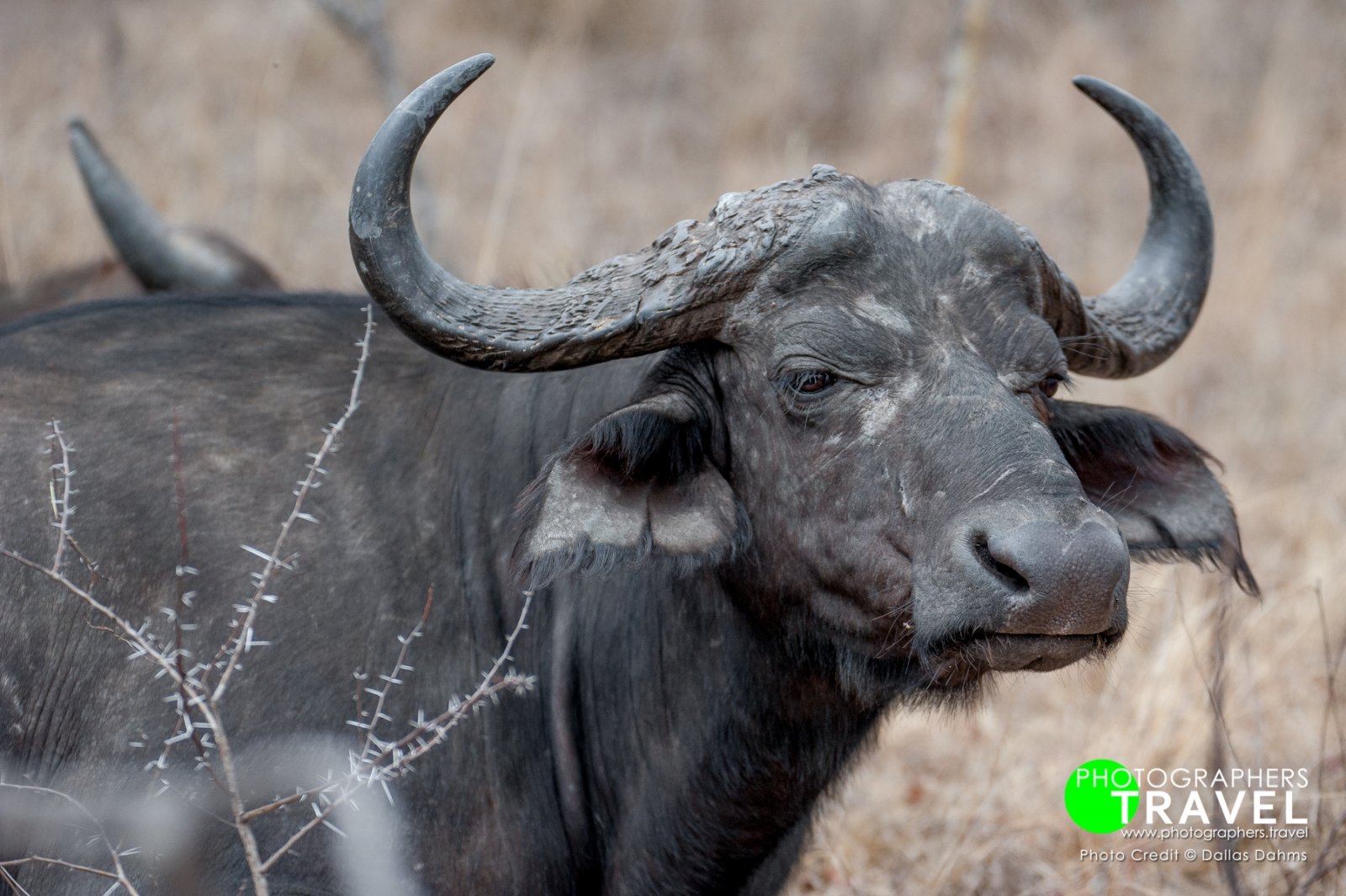 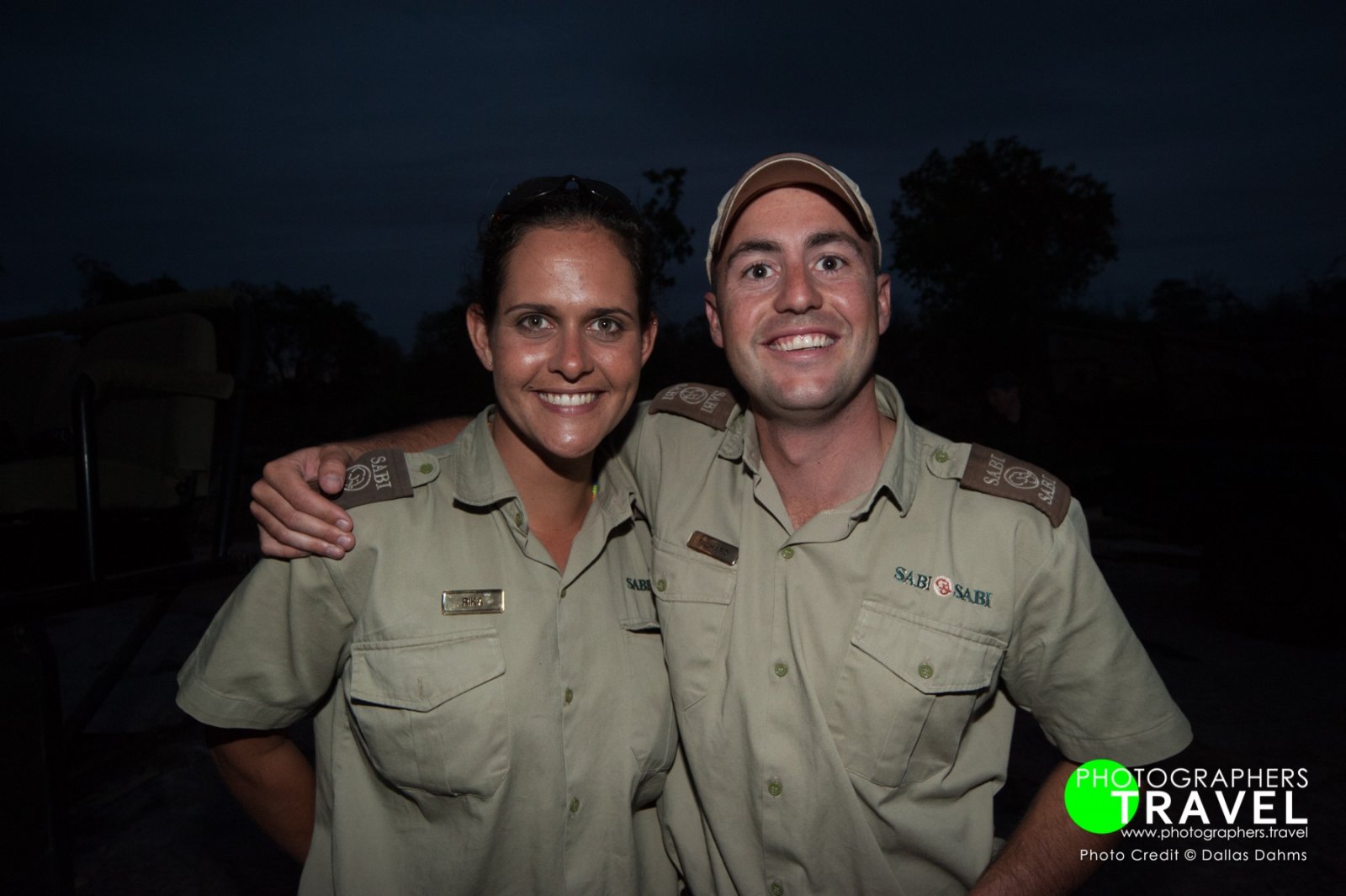 Rika & Richard gave us the time of our lives

By the end of our week in Sabi Sabi we were all elated and had hard drives bursting with thousands of images. It was just an incredible experience that by far exceeded all of our expectations. However, it would be another 2 years before we got to go there again for Safari #3.