ThinkTank have released what I think is probably the perfect roller for the photographer who needs to travel by air with a decent amount of kit on any kind of photography excursion.

As many of my readers over the years will already know, one of the biggest problems I have had since I began hosting photo safaris, is picking a suitable means of travelling with my gear on local flights. In the past I have used both the other (older) ThinkTank Airport rollers, namely the International and the Security. Both have their own strengths as conveyors of equipment, but for the most part they are also part of the problem in that they weigh a fair amount before you have even put any gear in them.

These days the airlines are getting stricter with the carry on luggage limits and most of them in South Africa limit you to 7 or 8 kilos in a single carry on item for economy class seats. There is no way I would be able to get away with dragging the Airport Security V2.0 onboard a local flight as hand luggage these days. It’s a wonderful case to keep your gear safe in, but it’s not the most inconspicuous, mainly because of its size. When the cabin crew who man the gangways and plane doors see you bringing it onboard they will most definitely stop you and ask you to sky check it. The Airport International is a bit smaller than the Security, but it is still big enough to attract unwanted attention from the cabin crew.

In preparation for this year’s Ultimate Big 5 Safari I was in a bit of a quandary when it came to deciding which bag I should use. On the two previous safaris I used the ThinkTank Retrospective 50 which swallows up an incredible amount of gear, including my 13” MacBook Pro and a bunch of other things like chargers, hard drives and power supplies. I like that bag a lot, but it is a bit large to carry around casually and I also had an issue a few years ago in getting it to fit in the overhead of a small plane. When fully loaded it also doesn’t easily go under the seat in front of you.

My favourite and most used camera bag is the ThinkTank Retrospective 7. It can carry both of my Olympus E-M1 bodies, the Oly 50-200mm (without hood and tripod mount) and a bunch of other items I would want on the safari. However, the pouch on the rear of that bag is designed for iPads and isn’t big enough to fit my 13” laptop. Despite this I had pretty much decided that this was going to be my bag because I could always carry the laptop in its Thule case as a personal item and/or put it into that rear slip long side up.

Then ThinkTank announced the Airport Advantage about 2 weeks prior to my departure. Just by looking at photos of it and watching the video on their website I knew that this would be the perfect case for me to take on safari this year. About a week or so later it arrived at my door via courier and boy was I happy to meet it!

The Airport Advantage is a lot lighter and more importantly slighter in stature than the other ThinkTank Airport rollers, which means that when you look at it, it doesn’t attract any unwanted cabin crew attention. Yet this roller, in spite of this diminished appearance, possesses some sort of TARDIS-like magical power because it swallows up a lot of stuff, including some very large lenses which people coming on our safaris here in Southern African have been known to bring with them.

Like all bags with padded dividers there are a lot of configuration options for the interior of this roller. You get a decent amount of dividers with the case too, as well as a raincoat (more about the raincoat later). The three-part telescopic handle only runs about halfway down the spine of the case so the bottom section has enough depth to accommodate the largest of DSLR’s, including gripped ones, with their big lenses attached.

Typically on our safaris we find most of our guests bring two camera bodies, one main telephoto lens (the 200-400mm seems to be the most popular lens), a 70-200/2.8 and a wide angle like the 14-24/2.8, a flash, teleconverters and maybe one or two smaller lenses. So I took the opportunity on this most recent safari to see how this kind of kit would fit into the Airport Advantage. 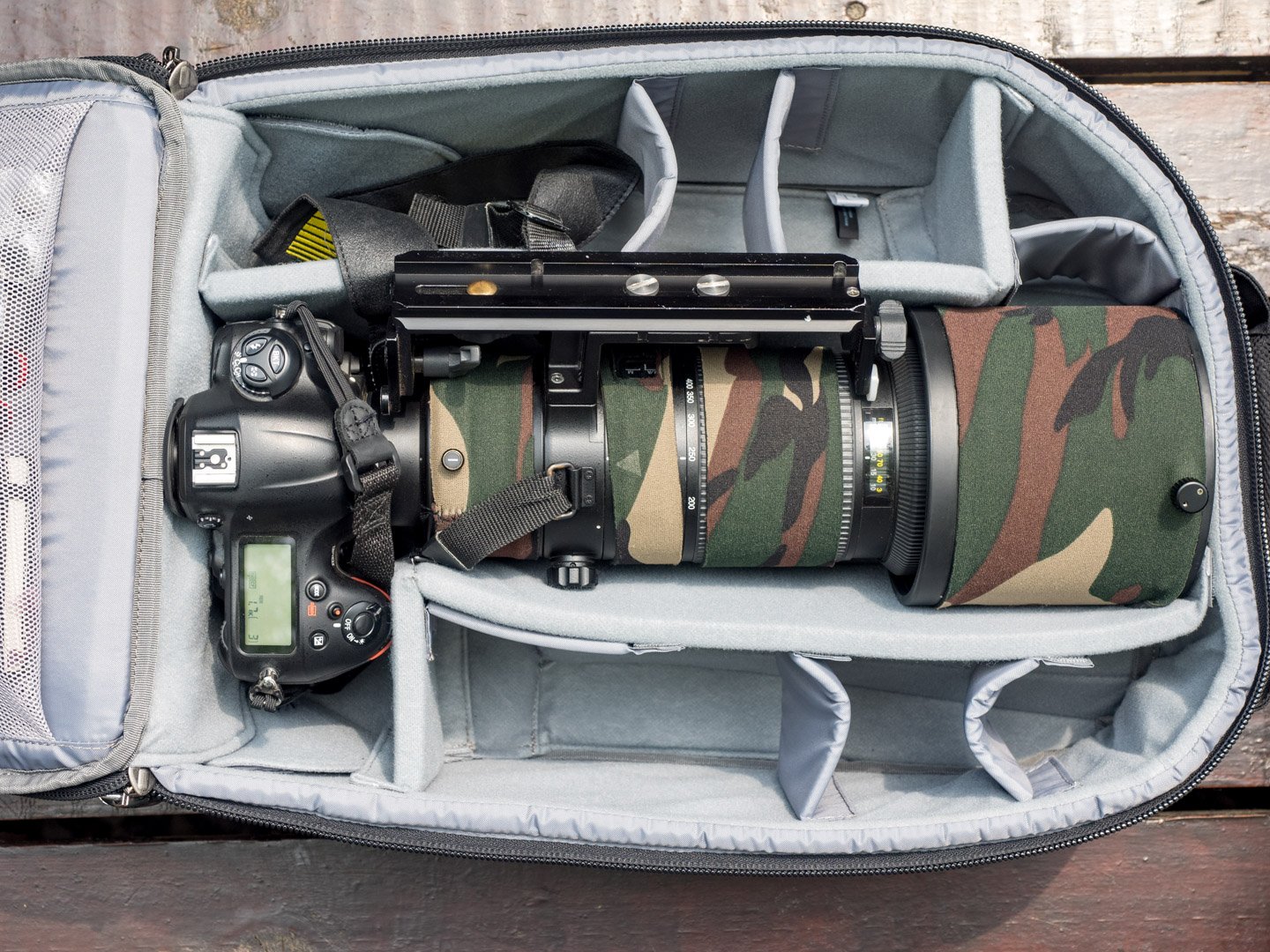 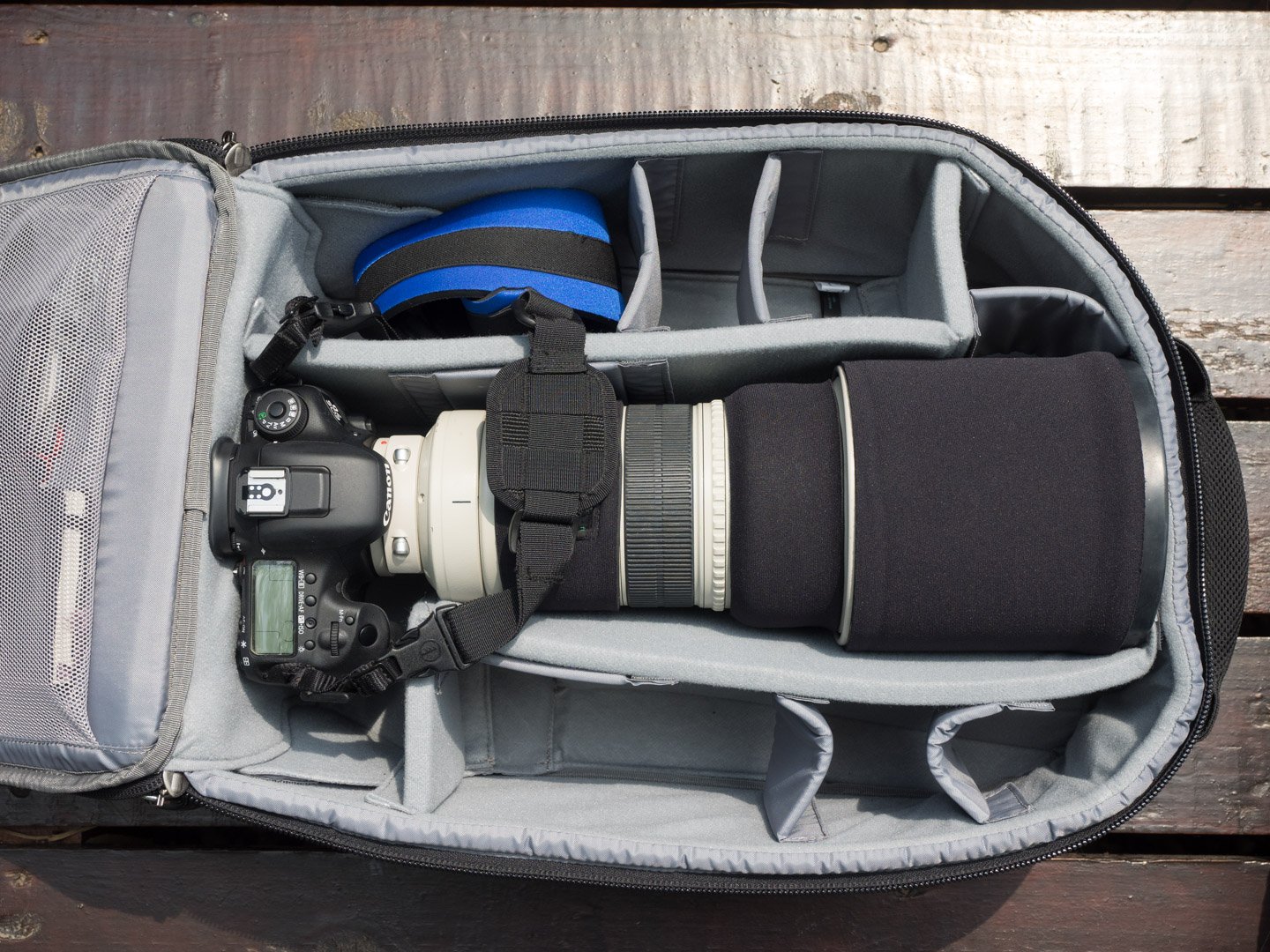 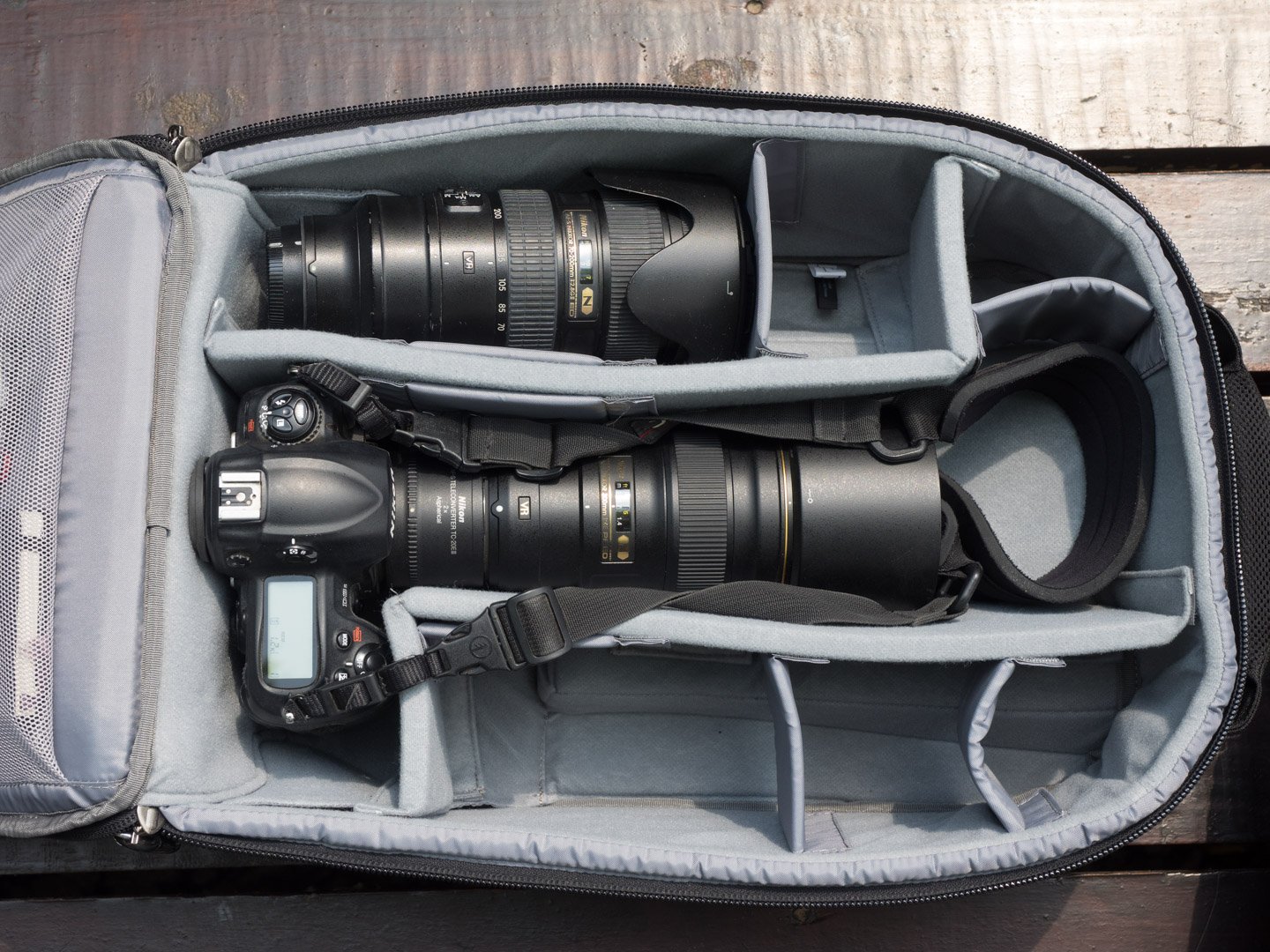 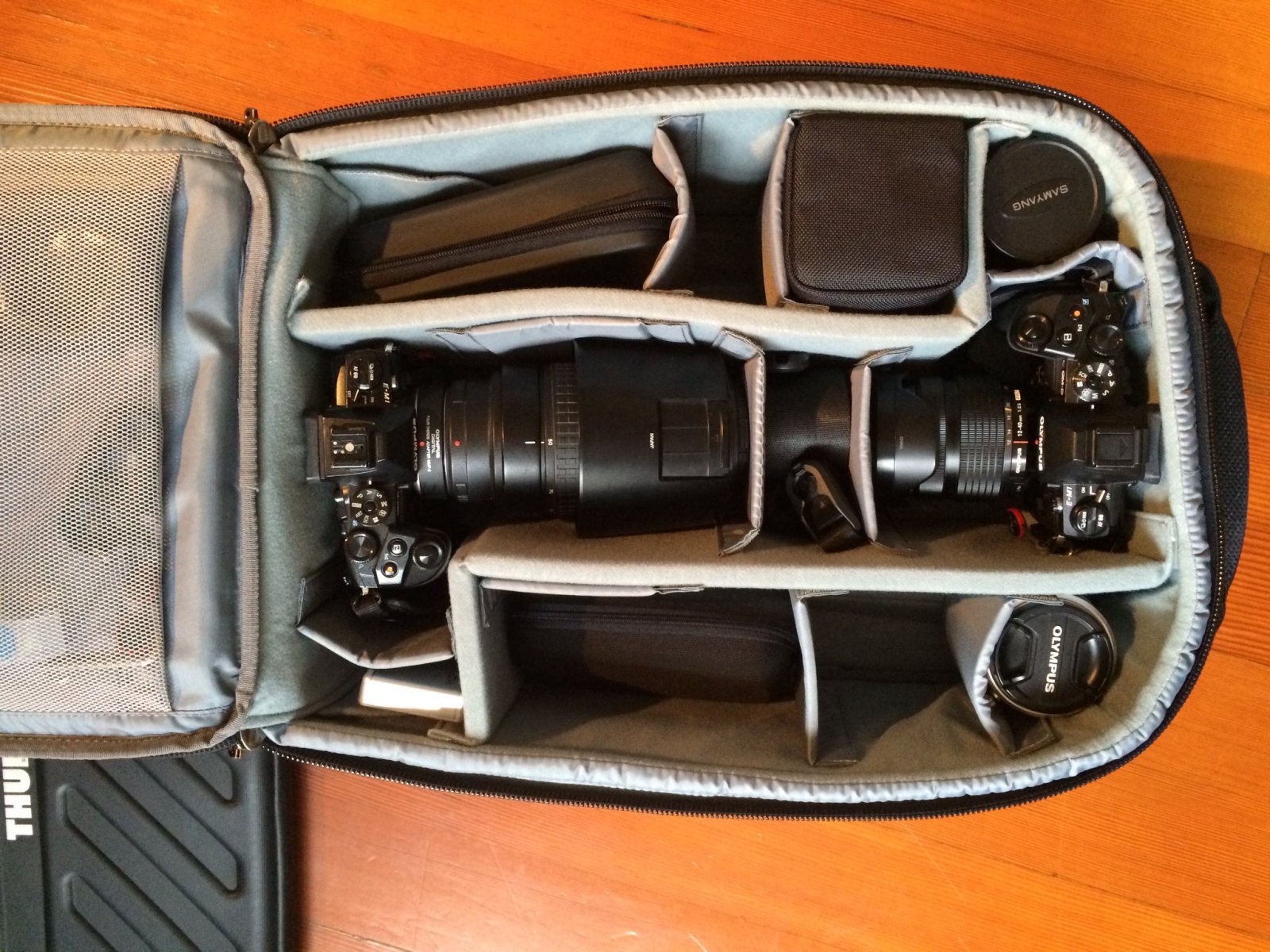 With everything packed I weighed it on the bathroom scale and it came in at around 10kgs, which is still over the official carry-on limit, but the thing is because it’s so compact it doesn’t look like a heavy bag and nobody raised an eyebrow at all on my 2 domestic flights this time around.

While it is a truly amazing roller, there are one or two things about the Advantage that I think could be improved on.

Firstly the raincoat, like all other bag raincoats I have ever tried to use in a hurry, simply eludes me. We were out on a game drive and it started to rain, so I tried to cover it up but nothing seemed to fit logically. Eventually I just gave up and left it lying on top of the case as we made our way back to the camp. They really ought to coat these cases in something more water resistant than nylon. Maybe a lining inside the nylon would be better?

The other thing that I would like to have had is an external pocket to put my travel documents in. There is a zippered recess just underneath where you can put your business cards, but it isn’t deep enough to hold much more than a passport, and even that is a bit of a wiggle to get in on its own. I think that they could put a pouch on the flap of the laptop compartment which would then make this the absolute perfect safari travel roller.

Unlike the other Airport rollers I have used where there is a stretchy sleeve on the front for putting your laptop in, only to have it fall out if you’re not careful, the Advantage has a proper sleeve with a velcro flap. The sleeve doesn’t have any padding though, so if you’re going to travel with your laptop in there it’s a good idea to have some extra protection for your hardware. I use the Thule semi-hard shell for my MacBook and it survived not only a couple of hours in the overhead bins of the planes I went on, but also 12 hours of road transit between Johannesburg and the Sabi Sands. I was careful to make sure that no other bags were placed on top of it though.

There are handles on three sides of the Advantage which makes hoisting it into overhead bins quite easy. I like the design of the handle on the bottom of the case which also doubles as its balancing feet. A nice touch. 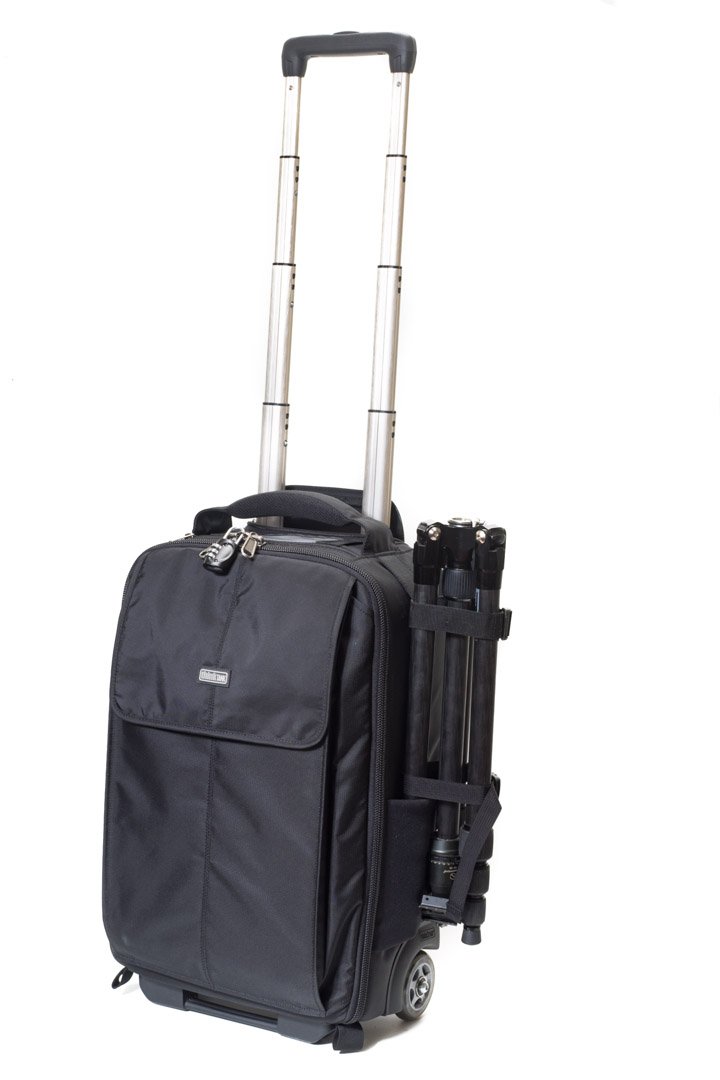 The other top quality finish is the telescopic handle. This feels very well made. I have wondered though why ThinkTank opted to use a dual shaft handle instead of a single one on this roller. I think it may have been a better design to use a single telescopic shaft that is housed on the outside of the back instead of two shafts that use up space on the inside of the case. Perhaps v2.0 will see some of these refinements?

If you are travelling with a tripod it is possible to strap one onto the side of the Advantage and Think Tank supply removable straps for you to use with the loops on the bag. Personally I always put my tripod in my checked luggage so I doubt I would use this, unless I was using the roller on a local shoot and needed to take a tripod with.

Unlike the big brother Airport Security, this roller doesn’t have a built-in TSA lock but it is possible to lock it from the zipper with your own luggage lock. I have a cheap combination lock which I have no doubt any thief could probably gnaw off in a matter of seconds, but I suppose it’s better than nothing if your bag might be unattended for a short while.

The wheels are super smooth to run and I put those to the test properly when I had to literally sprint through OR Tambo airport to board my flight home on time. I think Wayde Van Niekerk better watch out – this old dude can shift his molecules quickly when he needs to!

In spite of my few little nitpicks and improvement suggestions, this is by far the most useful travelling case I have ever used for my camera gear. For people coming on our safaris it’s just about all you will need to bring out not only your essential camera gear but also a fair amount of accessories and of course your computer too. I highly recommend getting one to simplify your travels with cameras. 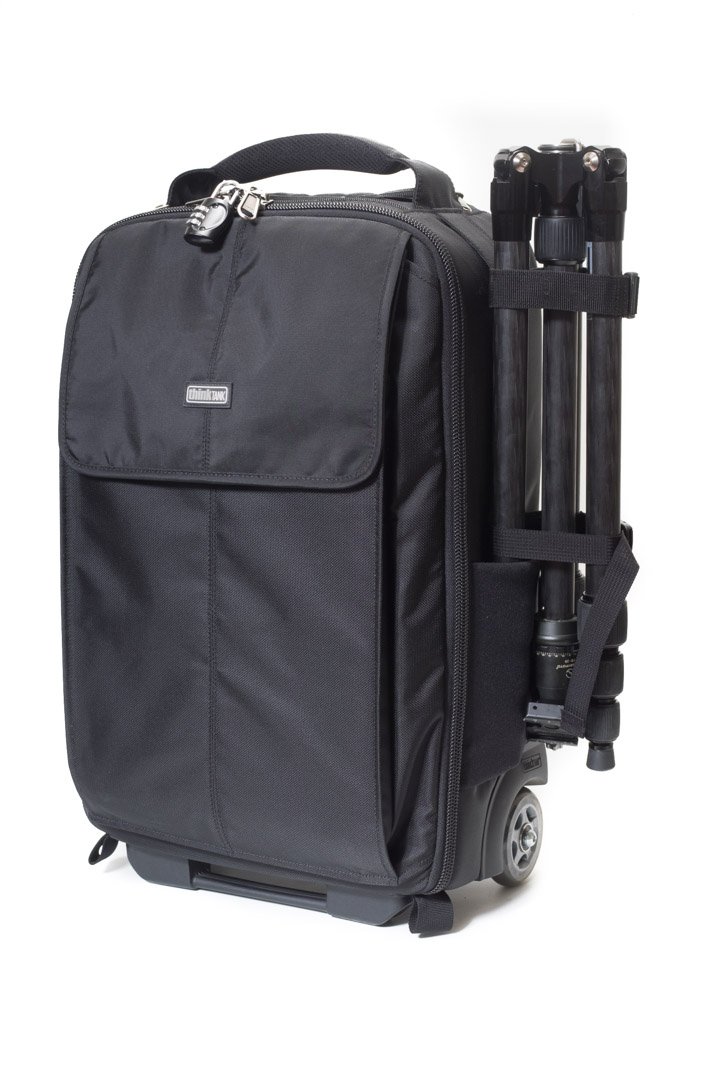